WHAT’S BEEN HAPPENING IN FARMS

This is the union newsletter for farm workers.

It includes updates about our campaigns, workers’ wins, and information on your rights. 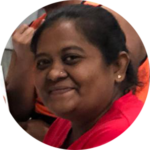 My name’s Sharmini and I’m a delegate on a NSW farm.

The biggest union win I’ve had is when we kicked a dodgy cash contractor off the farm.

We were working 12 hour days and were being paid only $15 or $16 an hour. All of us decided we had had enough and so we joined hands in the union. We stood strong and raised the issues.

The contractor was kicked out and now most of us are employed directly.

Of course one of the biggest concerns for us now is COVID-19.

We’re working shoulder to shoulder in the packing shed.

I know that an outbreak of COVID-19 could flare up still at any time. We have hand sanitiser, but we don’t have masks.

So, as the union delegate, I went to the bosses and said that at the very least, they need to check our temperatures every time we come into work.

Many of us live in crowded accommodation, so an outbreak could jump easily from one person to the next in a household.

Not long after, the bosses agreed. Now we get our temperature checked every day before work.

Visa amnesty is the only way to solve the workforce crisis in the farming industry.

Union activists met the other week to discuss our visa amnesty campaign. We spoke about how it won’t be easy, and that it might take a long time, but that we will win it anyway.

We will soon find out NALAC’s recommendations to the Federal Government soon.

A little while ago you might have completed a union survey for NALAC, an important group that the Federal Government set up to make recommendations on how to solve problems on farms. The union survey asked us to explain what needs to be fixed. Our answers were anonymously sent to NALAC in a submission.

Hopefully NALAC will recommend amnesty, but we don’t know for sure. We cannot depend on the Federal Government or NALAC to do the right thing. That’s why we must build power and support in the community. (Scroll down for more information on NALAC and the survey).

On 15 September, the United Workers Union presented at the International Union of Foodworkers (IUF) regional conference on Farm Worker Organising.
We spoke to the conference about our union’s efforts to improve conditions in the Tomato glasshouse industry, including by removing dodgy labour hire contractors and negotiating for better job security for workers.
At this conference our Italian affiliate Federazione Lavoratori Agroindustria told participants about winning an Amnesty for undocumented workers this year in Italy.

So far 40,000 of the 400,000 undocumented workers in Italy have taken up the right to come forward and receive the right to work. COVID has restricted more from coming forward, but the union has big plans. They also agreed to meet with our union to discuss their campaign further and assist our own amnesty campaign.

YOUR RIGHTS AT WORK

The Federal Court recently confirmed it is a workplace right for workers to use the toilet and drink water when they are working. It does not have to be only during breaks.

A pay slip must be given to every worker within 1 working day of payment. You must be paid in money. Employees can’t be paid in things like food or discounted accommodation.

The Seasonal Workers at two different sites on a blueberry farm compared their pay.

Workers at one of the sites realised that they were earning a lot less. This was because there were too many workers, not enough blueberries, and no covered tunnels for picking on wet days.

The team leaders asked the labour hire company to move them to another site, but they were refused.

So all of the members decided to come together and met with the manager.

The farm workers asked him how he would feel if he was in their situation.

By uniting together, the union members forced the manager to act.

Half of the workers were sent to a different site and are now earning an hourly wage. Those who are still at the old site are able to earn more now, as there’s less workers and so a lot more blueberries to pick.

This member had been working as a casual for over 11 years on a farm in Victoria.

Her union advised that she should be entitled to LSL and drafted an email for her to send to her employer.

The member’s employer confirmed that she had accrued an entitlement of 9.8 weeks leave.

This works out to be approximately $10k!

“I never thought a casual worker could get LSL.  I never heard anything about LSL from my employer or anyone except for the Union.  I’m very surprised! And extremely happy that I have it! It is a big win for me and everyone like me. “

The Facts about Long Service Leave

THE POWER OF UNION

Seasonal Workers attended an online union meeting about piece-rates at the end of last month.

Piece-rates are meant to reward workers. They should help workers earn more, whenever they work extra hard.

But dodgy contractors use them to underpay workers.

In Australia, the law says piece-rate workers should earn more than workers who earn money hourly. That means you should earn at least $27.29 each hour.

Contact your organiser if you think the contractor is using piece-rates to steal from you.

FARM WORKERS' SURVEY - RESULTS ARE IN!

In July 2020 farm workers told NALAC their stories through a union survey. NALAC is the National Agricultural Labour Advisory Committee. It is a very important group set up by the Federal Government, which will advise them on how to fix many (but not all) of the farming workforce problems in Australia.

Farm workers told NALAC that they:

However, we can’t just wait for NALAC and the Federal Government to make the changes. The changes won’t be made without action from union members.

Together in the United Workers Union, farm workers can add pressure and force the Federal Government to fix the farming industry.

Talk to your union organiser about how you can get more involved and win.